The below fake news/posts are from journalists, media organizations, lawyers etc. 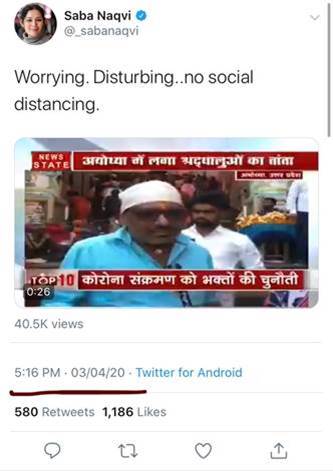 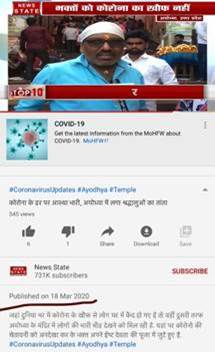 False information on availability of Hydroxychloroquine 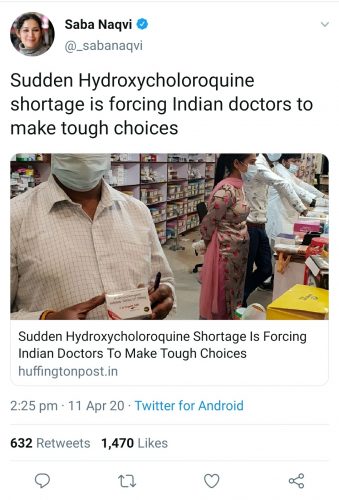 2. A lot of Jamaat Supporters posted a picture with clarifications and chronology where they said there was no rule of not gathering on the 13-14th march when thousands of their supporters organized the event. But here is the official order from Delhi Govt on 13th of MARCH. Hence, incorrect claims. 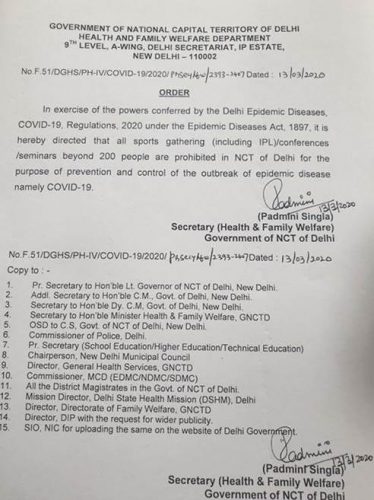 3. Rana Ayyub said it was Punishment for labourers for leaving the lockdown. The picture is 5 days old from her tweet and it was about lockdown violators. 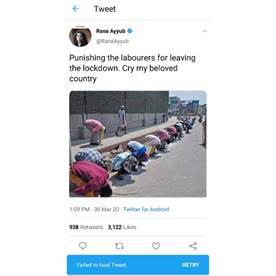 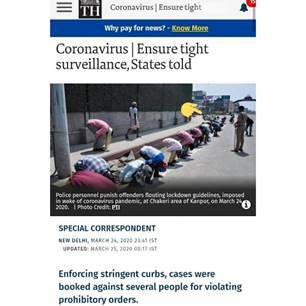 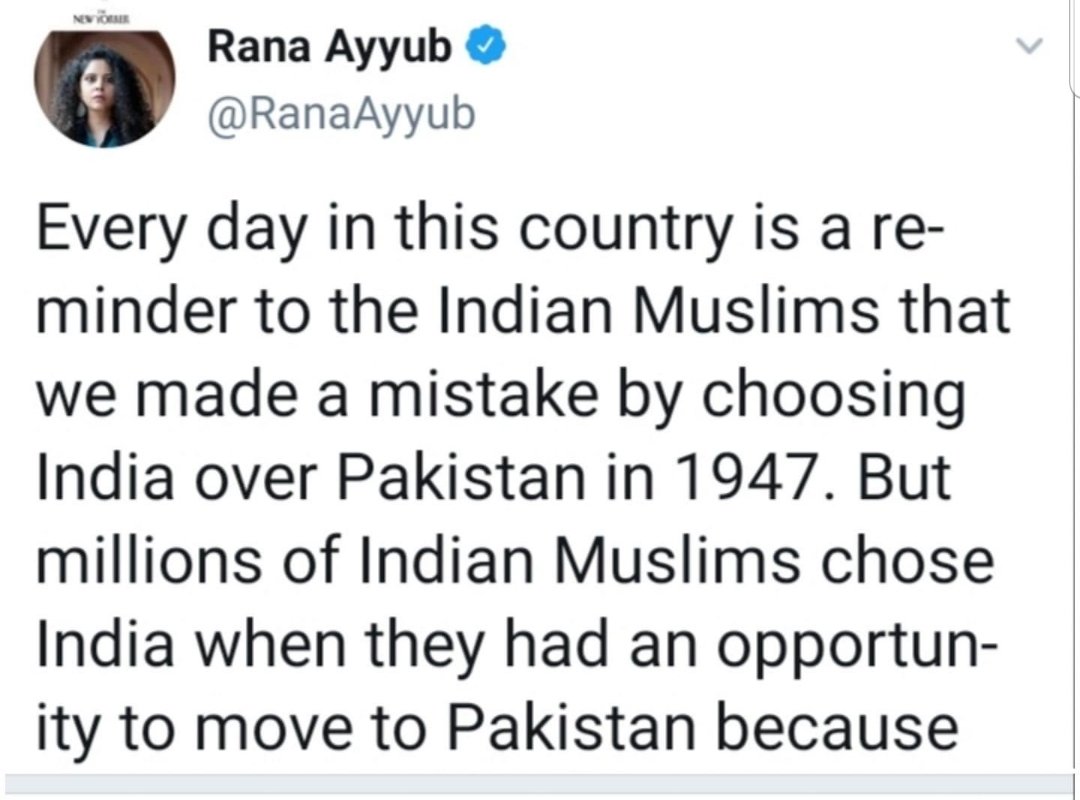 4. Quint wrote on 26th Mar – India was in stage 3 – community transmission and govt is not making it official. They claimed the doctor is from PM’s official taskforce said it. 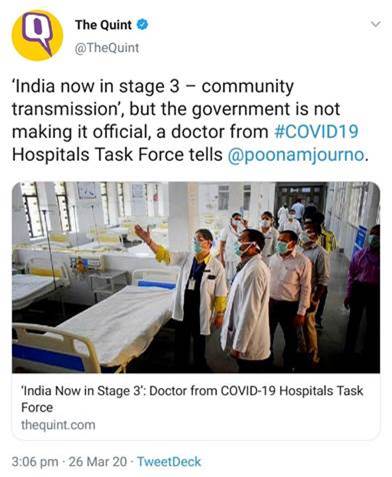 Truth – The Person is not on official task force list 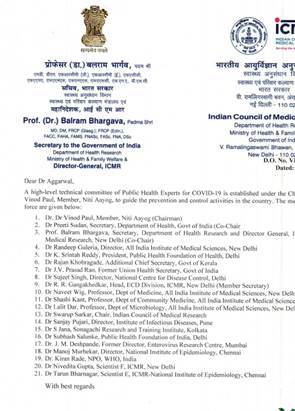 The person is not a “Medical” doctor 🙂 He is a PhD in Quality mgmt. 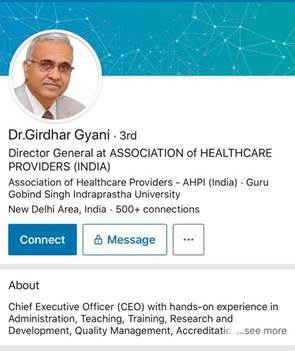 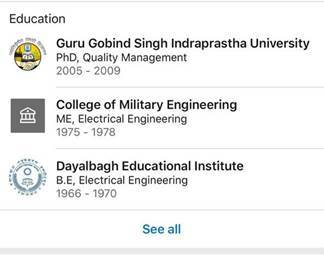 Dr Girdhar Gyani later commented that he was quoted out of context. The letter below by AHPI.  After some time, Quint later changed the article to say “India may be in Stage 3 …” 😀

5. Some guy claimed there were no thermal checks on India’s International Airports. This is the usual way to take on the government. 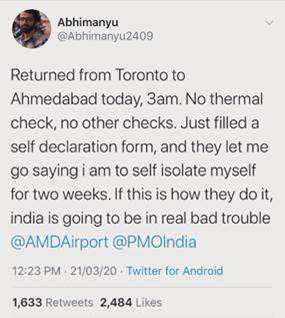 Airport Authorities destroyed his claim by showing him the proofs. 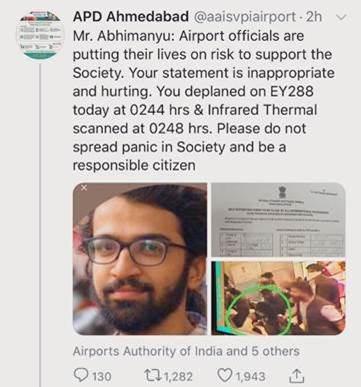 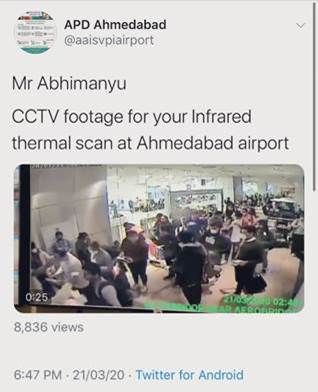 6. The Wire Editor – says Yogi Adityanath insisted large Ram Navmi fair amidst the lockdown. They attributed the quote to some Mahant Paramhans. 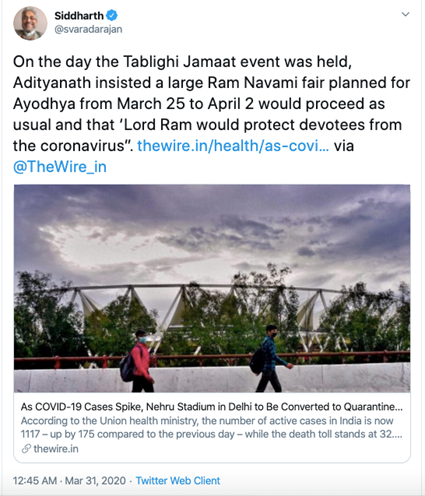 Truth – the fair was already canceled on Mar 20 by the UP govt. Mahant Paramhans had already been expelled from the trust in Nov 2019.

7. RealReport – Another Anti Govt News channel
Says Ram Navmi fair was organized with Thousands. They want to take on on the govt with another fake news. 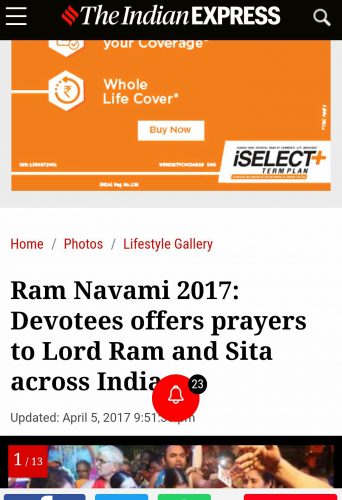 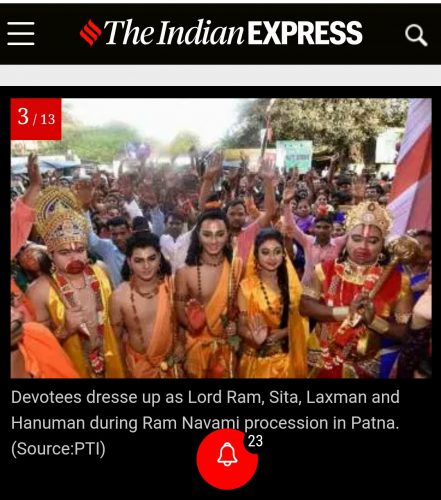 They later deleted and apologized.

8. NDTV Said people are eating snakes due to lack of food

Dear @ndtv please don't make stories without verification! I'm dead against hunting and killing of animals so is the State Govt. But to say that there's no rice left for the people leading to killing of cobra is rubbish! No one hunts snakes for consumption in Arunachal Pradesh. https://t.co/s07bX1rbEq— Kiren Rijiju (@KirenRijiju) April 20, 2020

They later updated their story and said “The main focus of the story was wildlife crime. ” LOL

9. Scroll.in said children are eating frogs due to lack of food

#PIBFactCheck
News website https://t.co/BuXMbgnZXN reported that children Jehanabad are living on frogs as they have no food grains at home.
Truth: DM Jehanabad inquiry finds there is sufficient food in their houses and the video was making of some irresponsible people. https://t.co/iAIGPMsldh pic.twitter.com/5LVpMXcbvk— PIB India #StayHome #StaySafe (@PIB_India) April 20, 2020

Later the man was found as Seraj Ahmed and issue was brushed aside.

Btw it’s true that RSS is feeding several people but the agenda to show them or blame higher caste was busted.

Why surprise when some Muslims are attacking #COVID health workers in India!
Not unusual, it is a RESISTANCE against perceived 'brutal' state!
African American groups in US cities & immigrant youths in European suburbs often attack public transportation, social workers & police.

11. Prashant Bhushan  says a mother thew 5 children into river due to lack of food during lockdown

Heartbreaking! In A Shocking Incident, Mother In UP Throws 5 Children Into River. She said that she had no food for her children & that she was a daily wage earner & her work stopped during lockdownhttps://t.co/768NPChTlh— Prashant Bhushan (@pbhushan1) April 12, 2020 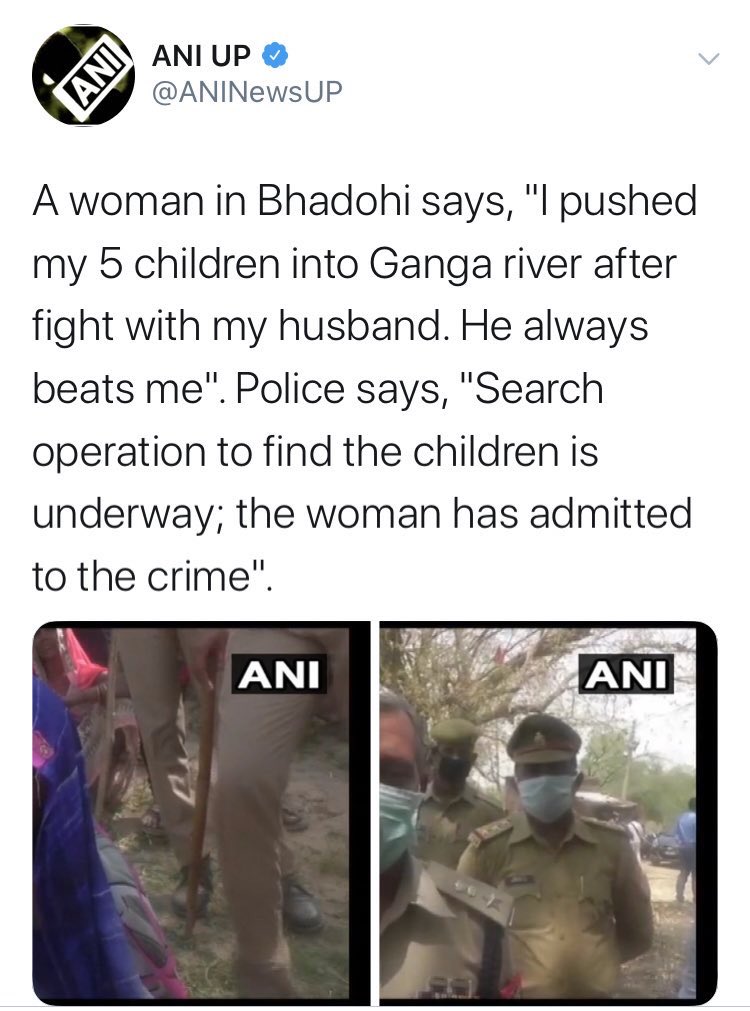 He has also shared news of children eating frogs and other fake stories. Beware of the agenda.

In these times, media and other organizations must leave their political inclinations aside.Also people like these who spread hate an justify violence against doctors and police.

Why surprise when some Muslims are attacking #COVID health workers in India!
Not unusual, it is a RESISTANCE against perceived 'brutal' state!
African American groups in US cities & immigrant youths in European suburbs often attack public transportation, social workers & police.

The common Whatsapp forwards can be fact-checked from the governments official handle. https://twitter.com/PIBFactCheck

Urge you to check this before sharing anything further.

On the adventure that we all embark,Where there are no benchmarks;Let us stop at those stations,To enjoy the serene celebrations;Because no one knows when the trip ends,So don’t forget to appreciate the dividends –of the journey called Life!