My last post talked about the trip to Rayling Pathar; which we weren’t able to complete earlier due to the bad weather. Infact forget completing it, we weren’t even able to get to the start point. But this time, the weather was favorable and at least the morning of the trek was pleasantly cool.

We had been on the NH 48 several times so we knew the route was straight and smooth for about 70 km – until Velhe village I.e. the point where people stop for snacks en route to several treks like Torna fort, Madhe Ghat etc. 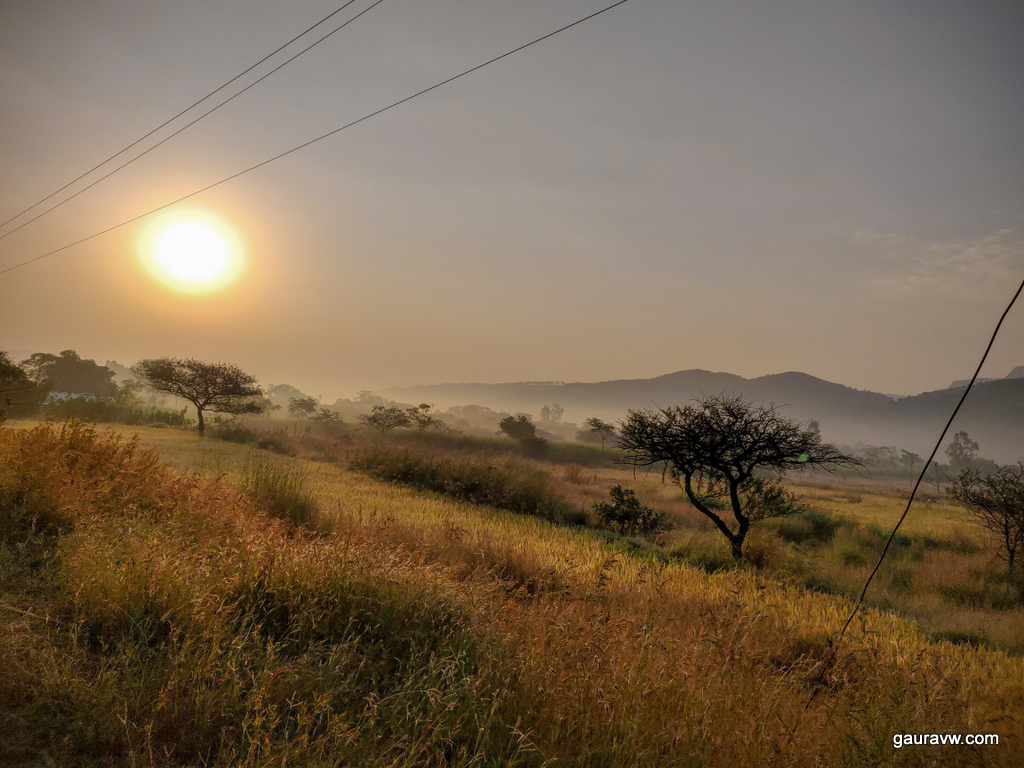 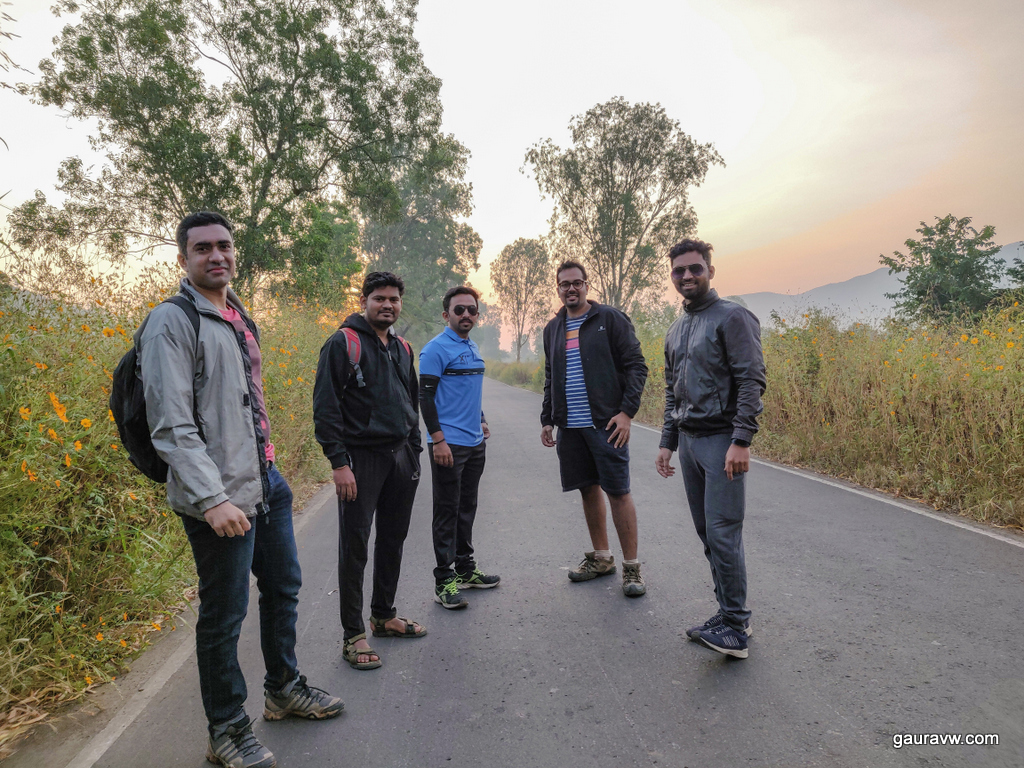 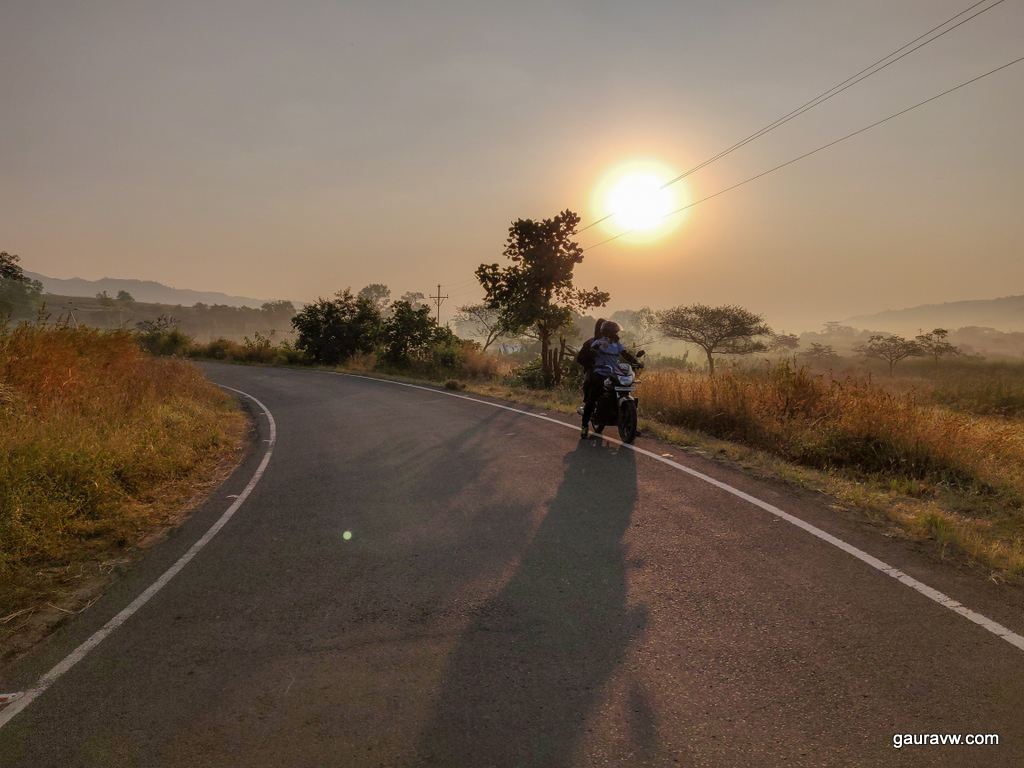 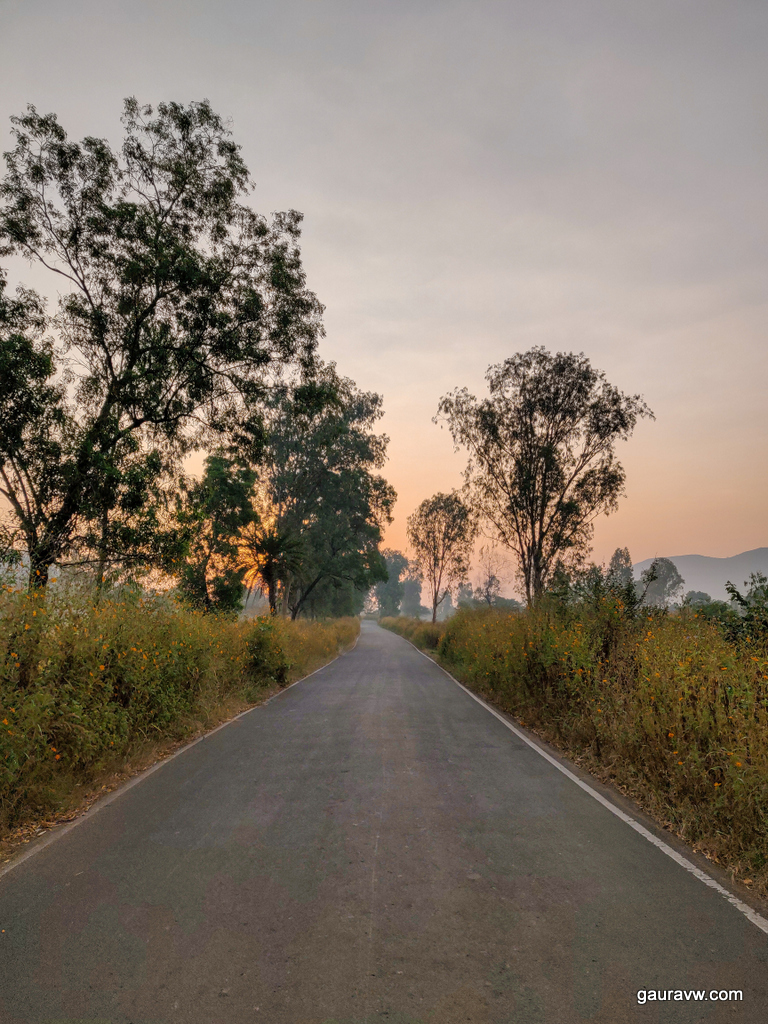 We were 6 – three had failed the last time and three others who had joined us only because we could convince them that it would be an EASY trek. I believe they realized our bluff when they got to know that the starting point was still a few hours away. Fortunately for us and Unfortunately for them, they couldn’t go back after having made it so far. 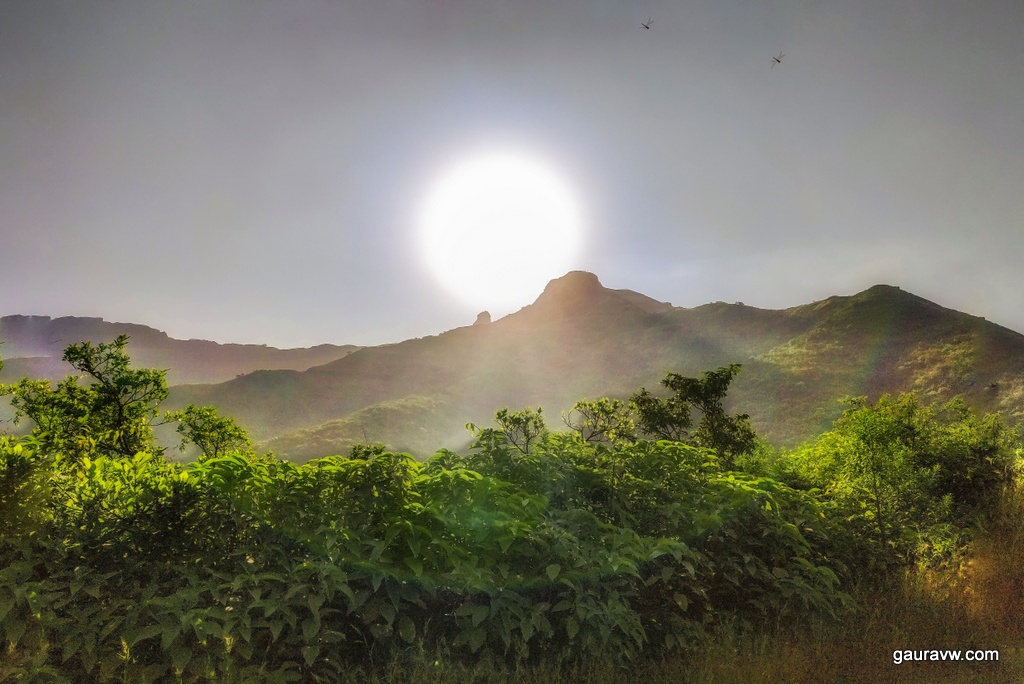 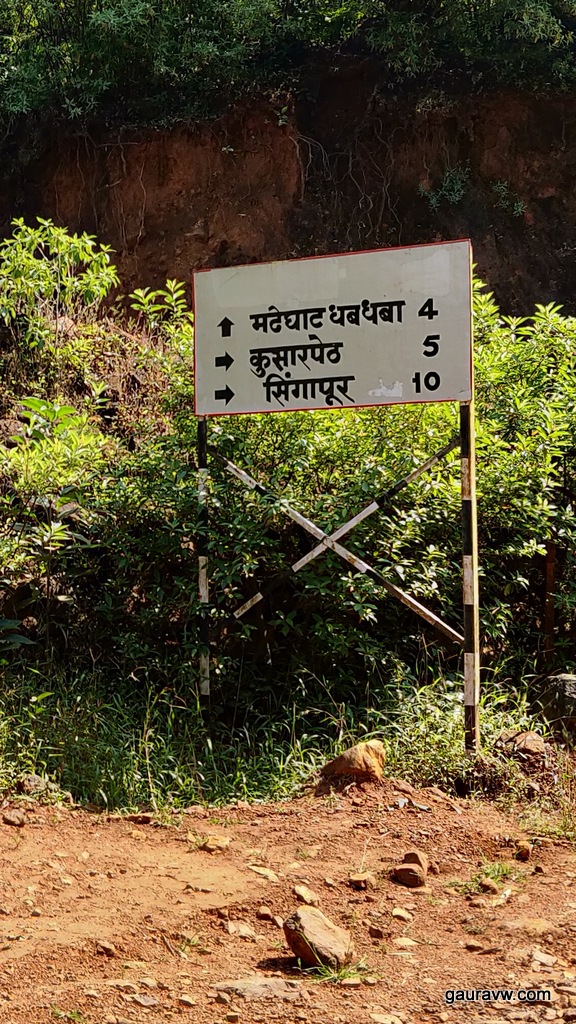 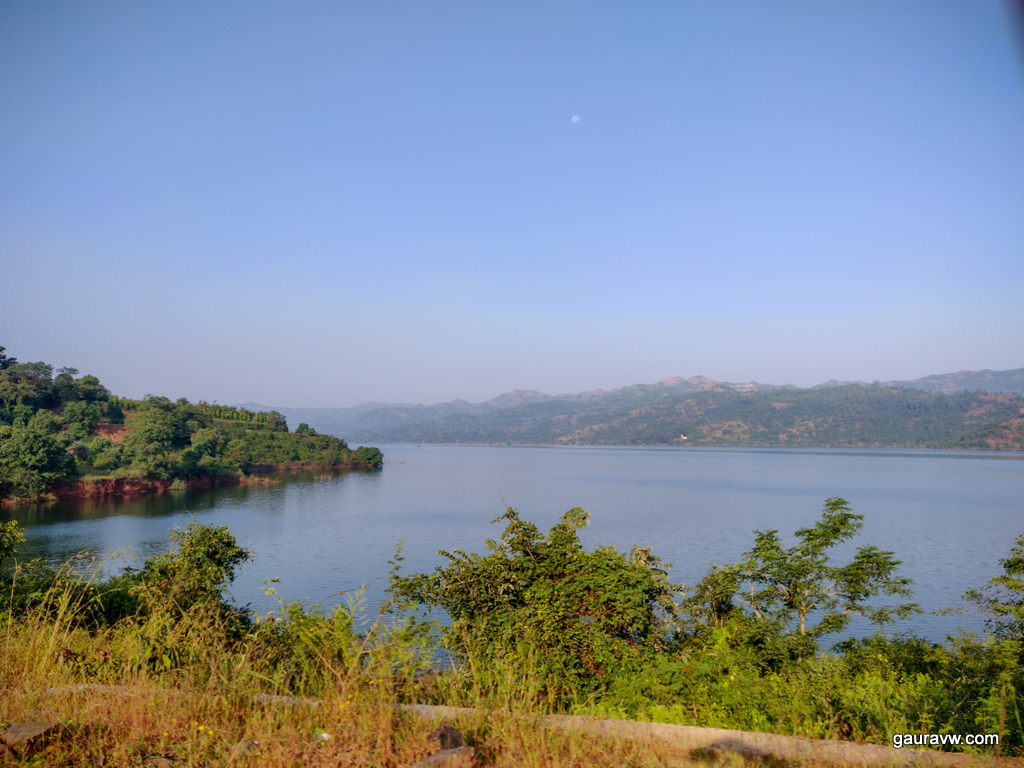 Anyway, the ghats post Velhe had several steep blind curves and changing gears was tricky but the picturesque was a treat to watch and so we enjoyed the sights. A diversion separated the road to Rayling Pathar and Madhe Ghat which is easy to miss but if you keep a watch on the signboard which indicates “Singapur“, you would know you are on the right path.

The final stretch is the most difficult one – we took around 1.5 hours to manage this. We shot a video here where it can be seen the bike wasn’t able to move on the terrain sadly it wasn’t shared to me. But somehow, we finally made it to the start point!

We started walking into the forest and followed a path which we felt could take us ahead. (There will be no one to guide you where to park or the way – you need to use your instincts ). I was somehow happy that we didn’t make it here during monsoons or else it would have been way too difficult with the added downpour. It lead us to a plateau which was not something we expected.

As we moved ahead, we had to ascend on an adjacent hill. And the view, of course, was fantastic – we could see Lingana fort clearly and make out the Raigad fort which was at some distance away. We spent some quiet time there (not really – Santosh, as usual, kept pestering everyone for his photos:) ).

Since most were tired – three of us (A, B, Digvijay) decided not to proceed any further, the rest including me descended to see the view closer to the edge of the plateau. There we analyzed as to how people would move up Lingana and enjoy the panoramic view of the place. And when it was time to go back, we thought we could climb back up and join the rest. Out of the blue, Amit started walking towards the direction we had come but on the same surface. No one knew if there was a route from there but we followed.

We somehow had to communicate with the other group so they could also start with the return journey but there was no network. So we yelled, howled and screamed and thankfully they were able to understand even if not hear us and replied back. Now both the groups moved parallely and kept howling to assure that we were all moving in the right direction. After 30 mins, we weren’t able to hear their noise. As we walked ahead, we had reached the end of the hill and a step more would have lead us to heaven literally. We were lost.
Going back on the normal route would cost us another 2 hours so we knew we had to find a way to catch up with them. To make things worse, Amit had a sprained ankle. It was a scary situation, we were tired and had no water left with us. We couldn’t afford any more time to waste.
We had to ascend an entire hill which was too steep and make our way up by taking the support of the trees. (In such a situation I couldn’t click pictures). The other group had to pull us up to get us on the walkable track.

We walked back through the jungle and laid down on the ground on reaching the parking area. The trek was complete! “Haar ke jitne wale ko bazeegar kehte hai” kept coming to my mind. But now the Bazeegars had to find water to survive. We stopped at a hut nearby and asked for water. The kind lady got us the elixir of life in a jug. The water had never tasted so good before.
We gave them money and some biscuits as a token of thankfulness towards their kind gesture. Strangely then, one of the bikes wasn’t starting. After several attempts, we gave up. A moment of silence followed, we all looked at each other’s faces because there seemed no choice here. We were at least 3 hours away from the nearest mechanic but there was no coming back, it was already 2 pm, no one would have agreed to come to this remote place. The only option was to abandon the bike. It was a grave situation. I felt as if we took a wrong decision by coming here and just then to our surprise the bike started. It took us some time to comment on this as we were far from sure as to what could have happened. Digvijay thought the ignition was switched off probably by the kids when they started playing near the bike when we enjoyed drinking water.

It was a special moment for all of us. The relief we felt cannot be expressed in words.

This trip had so many up and downs which makes it very memorable for us. The return journey was not comfortable but at least it was smooth. 🙂

If you have just one place to visit in Singapore then this is it! You will find several gardens, tropical plants, well-manicured parks, many lakes, a breathtaking rainforest, exotic flowers, pretty bridges, small waterfalls, numerous birds, lazy turtles and smiling faces. There is so much creativity on display here that you will not be able […]

The High Flyers show is not to be missed. At the time of the event, the amphitheater will be flocked with people of all ages. It features several birds that can talk, sing and of course fly. These birds are highly trained. The Macaws can swoop over the audience and into the hoop leaving everyone […]