It was the most awaited time of the year for Punekars – the monsoons!! And I’m writing this article mid of the season and unfortunately, this is my first trip in this celebrated monsoon.  Better late than never.

The trip started at 5.30 am in the morning, with my pro trekker friend Santosh, who picked me up on the way only to be joined by other pro trekkers Amit and Omkar. The destination was Rayling Pathar! Wait, what? Yes, the title doesn’t match the destination but neither does our destiny.

It was the glorious day of the 72nd year of Indian Independence Day and we were out to explore the beauty of the world’s largest(populous) democracy.

The weather was perfect, the sky was covered with clouds but it wasn’t raining. The beautiful drive by the lake boosted our Serotonin levels so much that we covered 60 Kms quickly and reached Velhe Taluka where we had our breakfast at a small eatery. What a great start to the national holiday that was! We resumed our journey and took brief halts at the ghats to admire the lush green views and to click our dear friend Santosh (who wanted these to be put-up on Shaadi.com).

A glimpse of our ride can be seen in the following video.

The way to Rayling Pathar was through Singapur (yes that’s the spelling and that was the way! ). Don’t believe me? Check this

This was the trickiest part of our journey. The road leading to Singapur is a sort of a Dirt road and one cannot drive on it in rainy weather. So, to make things worse, it had started to rain and we lost balance several times on this path but luckily for us, Santosh and Amit were pros in handling the situation. It was literally the road less traveled by so much so that we were the only ones trying our daredevilry with no one observing us because of almost no visibility due to intense fog.

Thankfully, after nearly half an hour of the rough ride, we saw 3 men there who warned us about going any further on the bike because of unpaved road. But, we decided to royally ignore them and continued on our path ahead. We barely drove 50 meters before falling to the ground. We realized our mistake but there was no other alternative. If we chose to walk all the way to the destination, it would have taken 6 hours to return which meant driving back this treacherous path with an added adversity of no lights.

Surely, there are better ways to die than falling from the ghats. And on this note, we decided to return back and really speaking, we were satisfied with this adventure. However, before we started our return journey, Santosh wanted more pics for his Shaadi.com profile so we all had to wait until he was satiated with his clicks.

While returning, we managed to pass the uneven patch and at the start of juncture of Signapur road, Amit took a turn in opposite direction. He had mentally decided to go to Madhe Ghat and I believe he was oblivious of our physical condition. This was a pleasant surprise and a source of consternation at the same time because even though I was going to a new place,  the excitement wasn’t enough to subside my intense hunger for the food.

After we reached the entrance gate, we were charged an entry fee of Rs 10 per person. It seemed like a popular destination as it was flocked by people of all age groups. As we sat down to have tea, I hogged on hot bhaji’s.

Nearly 1 km walk from there was the vantage point where there was supposed to be a waterfall but we could only hear bustling of water due to low visibility.  As we were keen to see, we started the descent into the rocks. Initially, it seemed tricky to step on the wet rocks but as soon as my shoes got drenched, it all seemed easy as the entire focus was on to go on to the next rock instead of putting an effort to keep shoes dry. In less than 20 minutes, we could see the waterfall in all its glory. 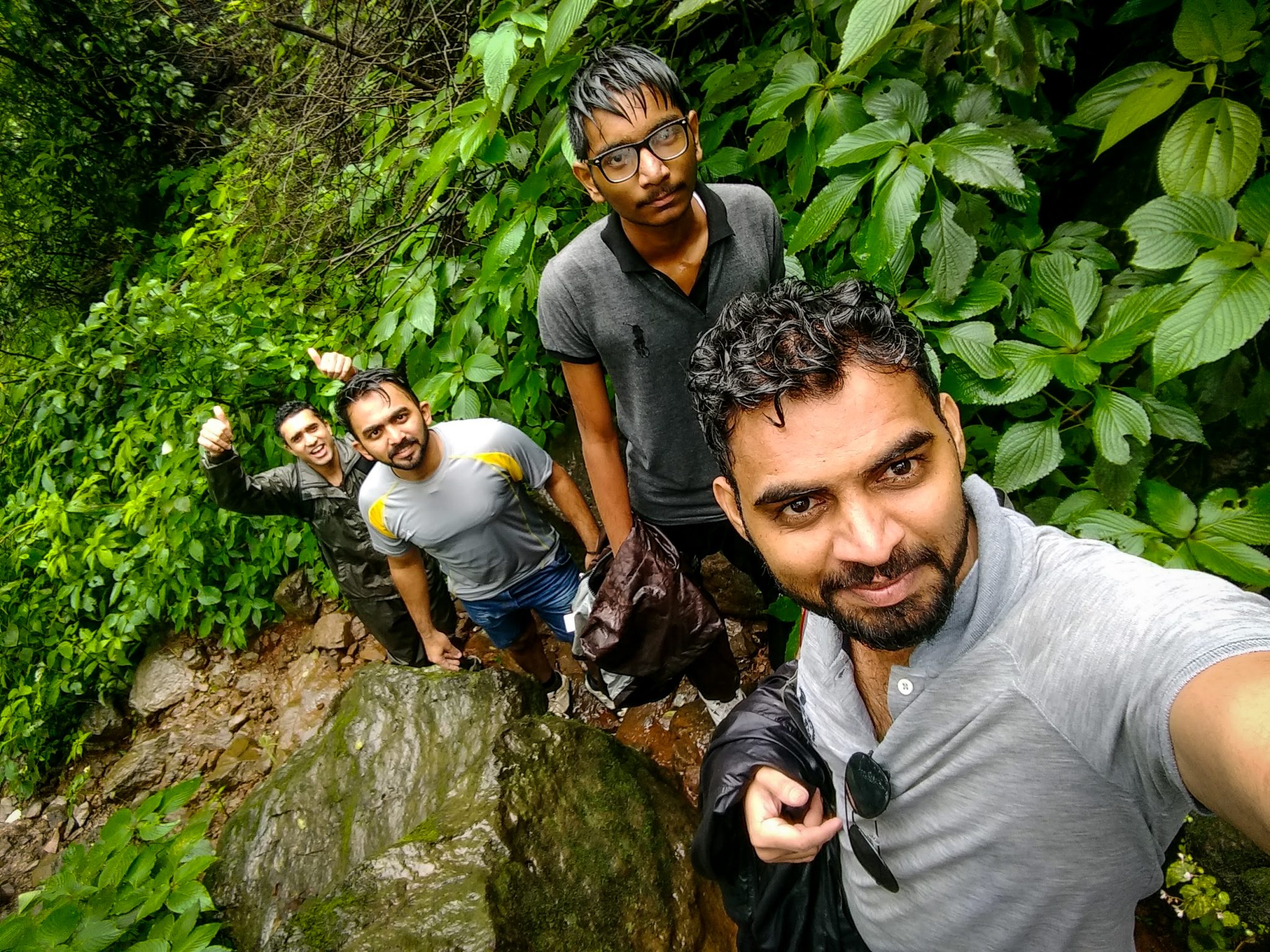 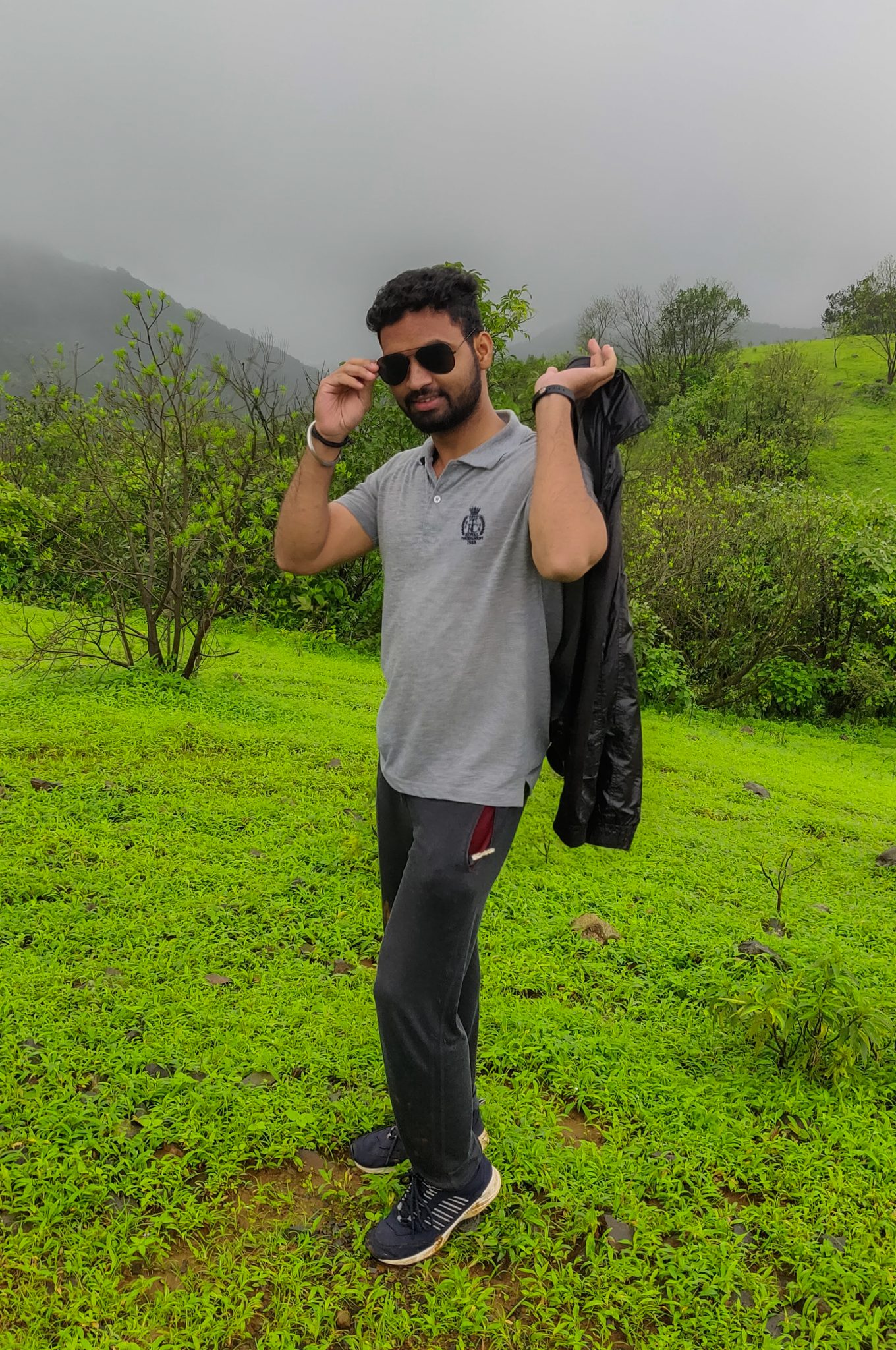 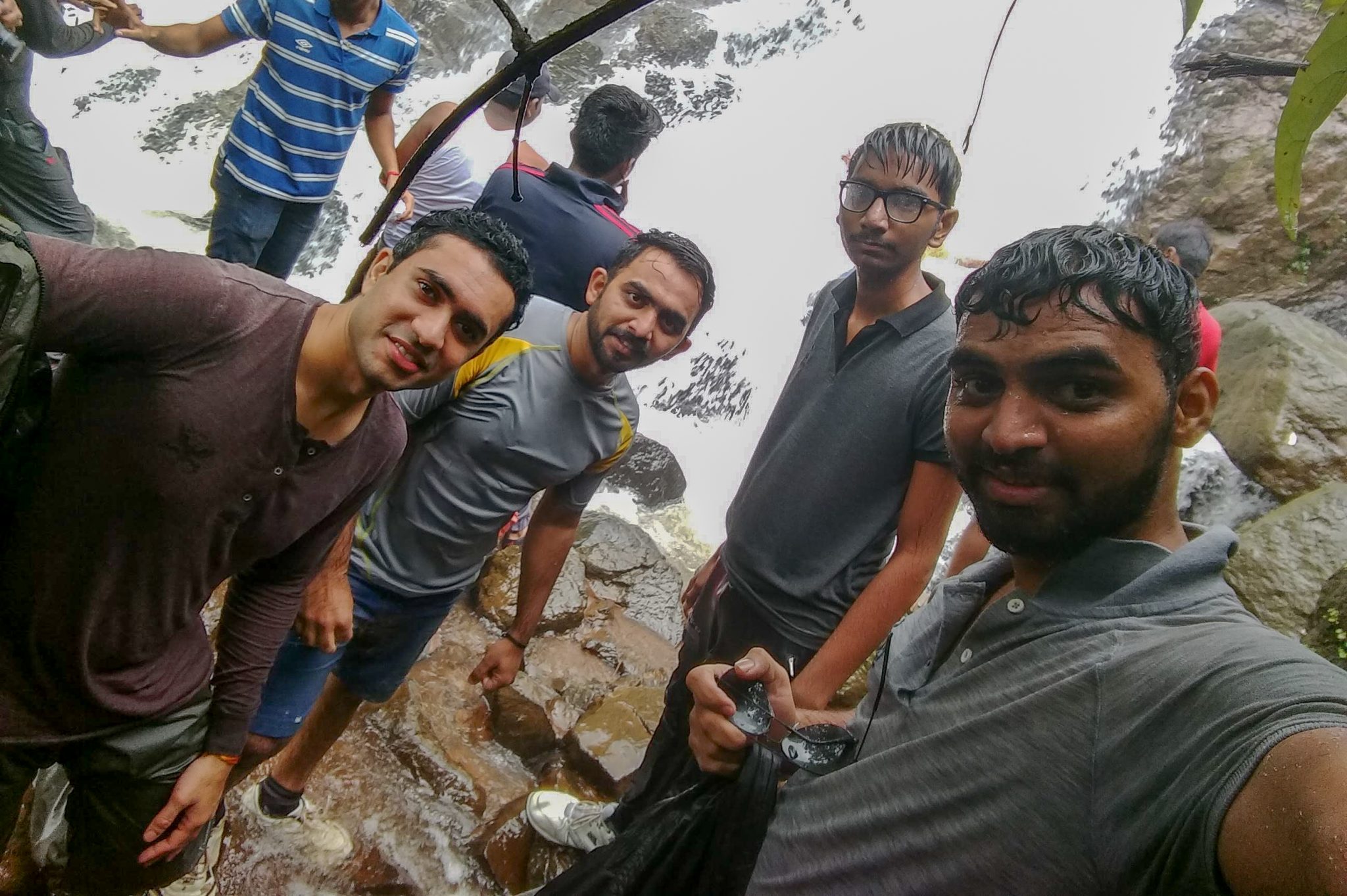 This is the first time in Pune I had witnessed such a huge waterfall.  It sure was a treat to the sore eyes.  My friends enjoyed taking shower while I was happily clicking them (which is what they wanted).

When we went back to the parking, the two pro bikers decided to clean their bikes in the rivulet that was flowing; for which they had to take their bikes in the middle of the flow, this meant Omkar and me had no other option besides getting drenched in the rain. After 10 minutes, Amit somehow managed to get his bike back on the ground from the flow. In the process, the bike’s rear portion got dirty again 😊.

Santosh who observed this phenomenon was, however still continued to clean his bike because he believed it was a strange and a rare one and if he does the same it wont happen. Noticing his washing skills, the onlookers wondered if he had worked in some bike servicing garage and if he would also wash their bikes as well. On the other hand, I wished that he bathed himself just as satisfactorily as he was washing his bike.

Almost after a year (imagine the frustration), Santosh was done. He seemed content with the state of the bike. So, when he started to come back to the ground, the scene was similar to this…

With the only exception being, unlike the clip above, it was muddy water and his bike was dirtier than before. What do you think Santosh did next? Did he follow Amit’s footsteps and like a sane person started to drive to the entrance gate? No!

He went back to the middle of the rivulet and started the cleaning process all over again!!! I looked at Amit, and he smiled from a distance as if silently agreeing with my thoughts on how proud we were to be friends with Santosh! We were both sympathetic towards each other’s feelings.

A decade later, after several unsuccessful trials, he came out victorious, on another 15th Aug, when India was declared a developed nation, we reached back home. Besides such a huge waterfall I hadn’t witnessed such levels of stupidity before except in our daily standups (I’m sure IT folks can relate to it, at least the ones in my team can)

On our return journey, we saw many people carrying Tricolor on their bikes. At some point there was this large group of about 50 people, dancing and singing on the tunes of the dhol tasha. We joined them in the festivity.

The return was smooth. Thanks Amit & Santosh for planning it out.