Varanasi – The oldest city of India

“Benaras is older than history, older than tradition, older even than legend and looks twice as old as all of them put together”- Mark Twain

Varanasi gets its name from two rivers which flow from the city’s two ends “Varun” and “Assi“. The mention of Varanasi might, in all certainty, make any Indian think of Temples and Ghats but the city has so much more to offer. Being the spiritual capital of India, many people from all walks of life and all around the world flock-in here. Each one in the quest of obtaining something different.

There are many places one can choose to stay; in the city or near the ghats and their costs are directly proportional to the distance from ghats.

A tip: If you are traveling alone I suggest you try Zostel or Hotel Santoor. I found them pretty comfortable & pocket-friendly for my short journey.

Now, if you are an early riser, the city has much more in store for you like enjoying the morning sunrise at a ghat near you. The first impression will leave you spell bound.

I was awed to know how every ghat had a story associated with it or rather each step had a one of their own, for example, The Tulsi ghat is dedicated to one of the greatest poets of the world – Tulsidas who wrote Ram Charit Manas – a poet that the present age can never produce, a poet who had composed an entire Epic of 12800 lines in a poetic format! 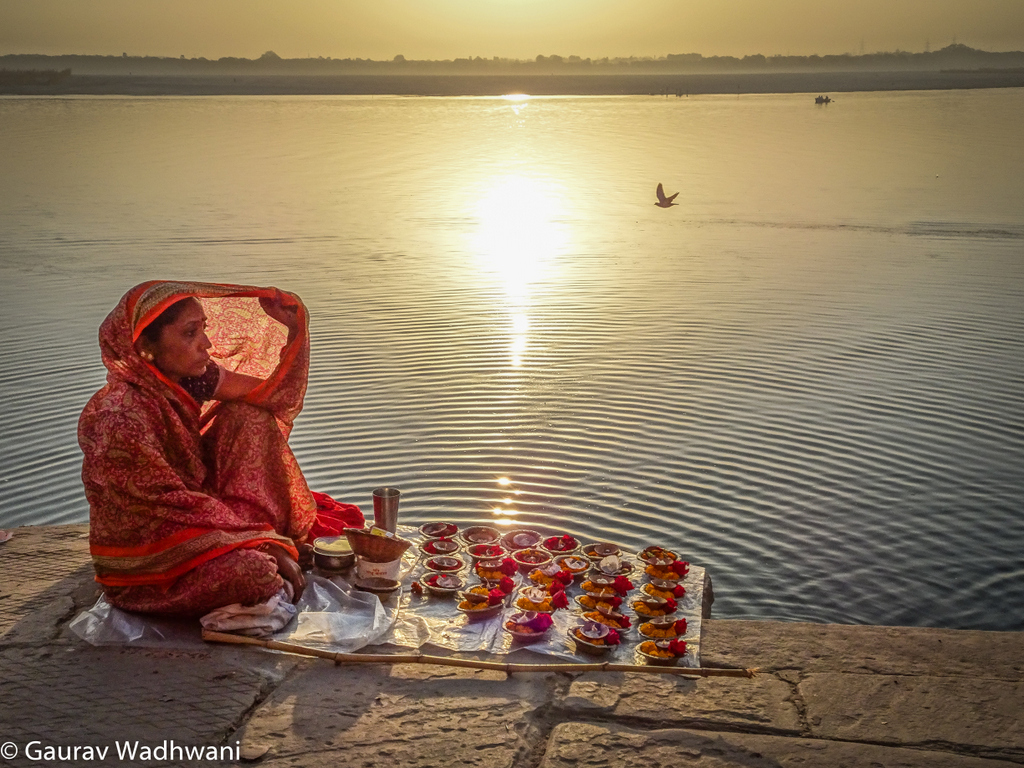 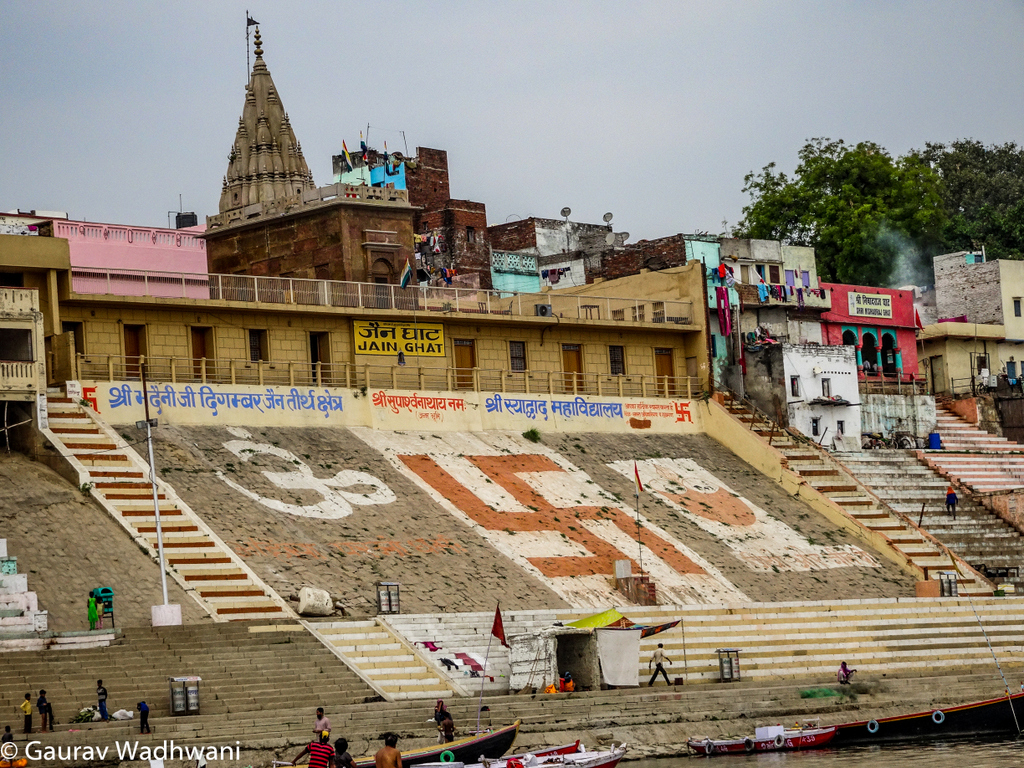 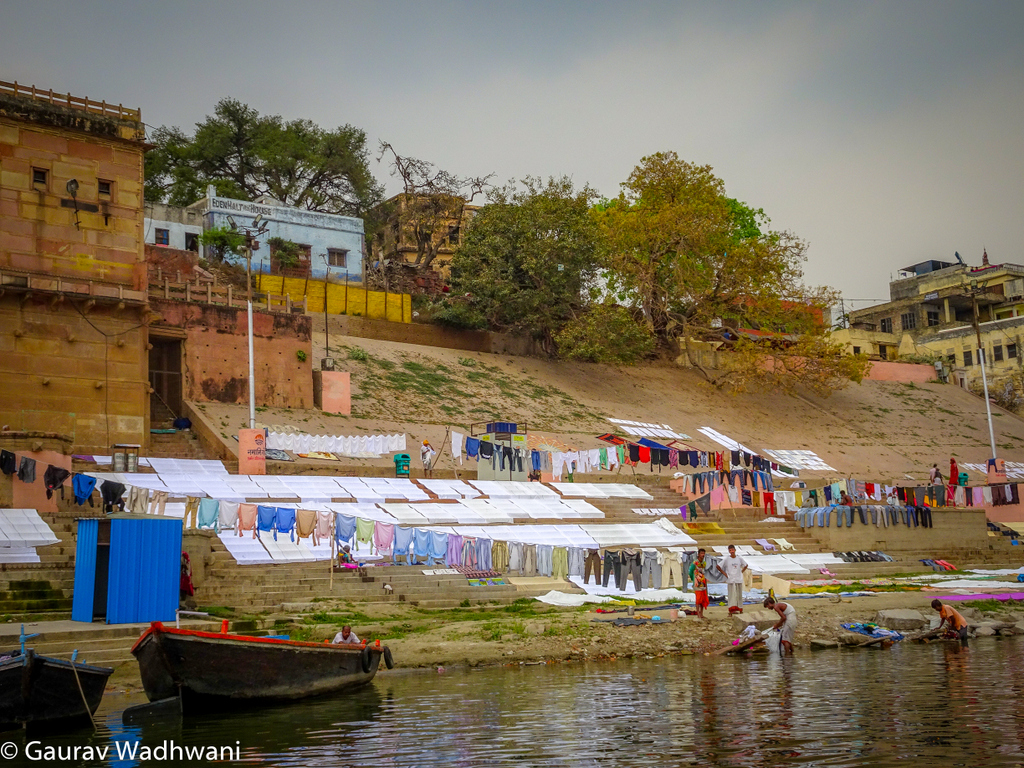 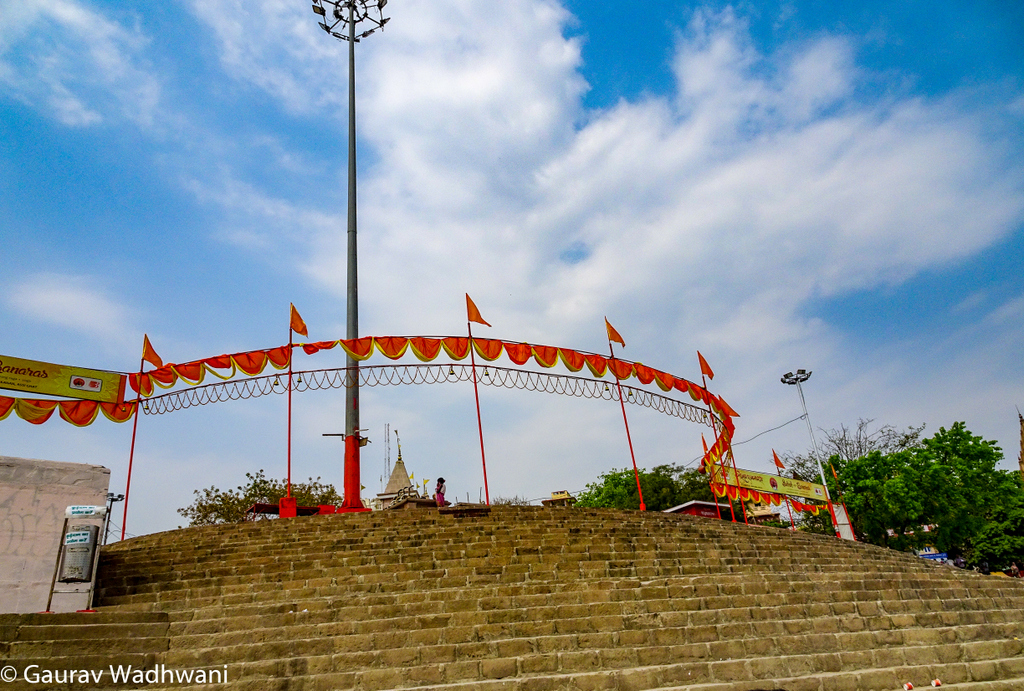 Anyway, coming back to the ghat, there are 4 Hanuman idols consecrated on this ghat so it is a must visit and if you have time then why not sit and write a poem yourself. The great poet finally left for heavenly abode on the Assi Ghat – the last Ghat which comes under Kashi. You can see a fairly young crowd at Assi due to its closeness to Banaras Hindu University.

The BHU is spread across 2700 acres and is known to be the Asia’s largest residential university. The university was established by noted educationist Madan Mohan Malaviya and there is another story behind it. The entire funds for the university were taken in form of donations some like Kashi Naresh ( visit Ramnagar fort ) donated land generously for the humble cause but getting funds wasn’t easy. MMM went door to door of rich landlords and extracted as much as he could, however, it wasn’t sufficient to fulfill the University.

So he went to Nizam of Hyderabad to ask funds for the university. Nizam who was averse to the ideas of Hinduism grew furious and hurled a shoe at him. Malaviya who was determined to manifest his dream decided to take the show and auction it. This news, when reached Nizam, made him angrier and he sent his subordinates to buy this shoe at any price to avoid his insult of being sold to a someone not rich as him. The bid for the shoe went through the roof; almost as high as getting multiple IPL teams and so the secular BHU became more secular by the wit and intellect of MMM.
To commemorate the founder of BHU, a statue of him has been erected right in front of New Vishwanath Temple.

I must admit that I haven’t seen a temple with a Shikhara as high as this one. The temple which is constructed out of marble, features around 9 small temples in it dedicated to many gods. Every window/ wall has been so thoughtfully made that it depicts a famous Hindu personality.

It has a lush green sprawling garden outside where one can find many students relaxing much like the Saraswati Temple of BITS Pilani; there’s another story which connects directly to this place but let’s leave it or lest we shall get lost.

In the evening, you can witness the magic of nature and watch the sunset at the Ghats. A philosopher might go on so far to say that even the sun feels upset that he won’t be experiencing the enchanting and grand Ganga aarti at 7:30 pm on Dashashwamedh Ghat!

You can take a boat ride to view all the ghats at night and enjoy the aarti sitting right in your boat just like we did but we reached late and you can see in the video all boats had already flocked the ghat before us. But the distance couldn’t lessen our enthusiasm. I would have regretted missing the Aarti if that were to happen.

Don’t miss the Manikarnika ghat! Period! All throughout the day, one can witness the burning funeral pyres here yet it is one of the auspicious places in Varanasi. And rightly so, the one who gets cremated attains Moksha and others who observe these visuals feel enlightened about the impermanence of our short journey!

This ghat is close to the Kashi Vishwanath temple which is one of 12 Jyotirlinga’s and one the holiest sites for the Hindus. It is surrounded by intense security on all gates and at all times. You cannot carry anything except for your wallet – not even a pen! Besides, you will be frisked almost 4 times before and after entering the temple! I have no photos to share because they don’t let you click in the premises or even around the periphery of it. The history has it that the Temple was destroyed a number of times by the Mughal emperors (or atleast tried) so much so that the there stands a Gyanvapi mosque at its original site and that should be enough for you to imagine the trepidation of rulers faced by the people at that time. However, the divinity of the temple calms you from within. I am among the few lucky ones who got to touch the Jyotirling. Also, there is an Annapurna temple in the nearby premises which has its own significance.

If there were some narrow-minded Muslim rulers who destroyed many temples, there was an outlier called Sant Kabir too. He is amongst the eminent who have lived on the holy land of Varanasi. (His poetry is translated by Rabindranath Tagore and also features in Guru Granth Sahib.). Kabir Chaura is the place where Kabir used to give his sermons.

There is a way to his home where one can see Samadhi of his parents and a well nearby it. Make sure to drink water from this well for it is known of to be an elixir of knowledge.

Varanasi has more temples than one can visit so planning on your trip in an effective manner is important. There’s a Sankat Mochan (Hanuman Temple where Tulsidas had Divine darshan of Lord Hanuman), Durga Mandir( aka Monkey temple – come here with your parents if you are planning for a love marriage – well that’s what the story says the Goddess supported it! ), Vishalakshi(Shaktipeeth – out of *51 total,  12 are most important ones, this one is among that!), Mrityunjay Mahadev(pray here to overcome unnatural death), Kalbhairav(the guardian of Varanasi and its devotees). 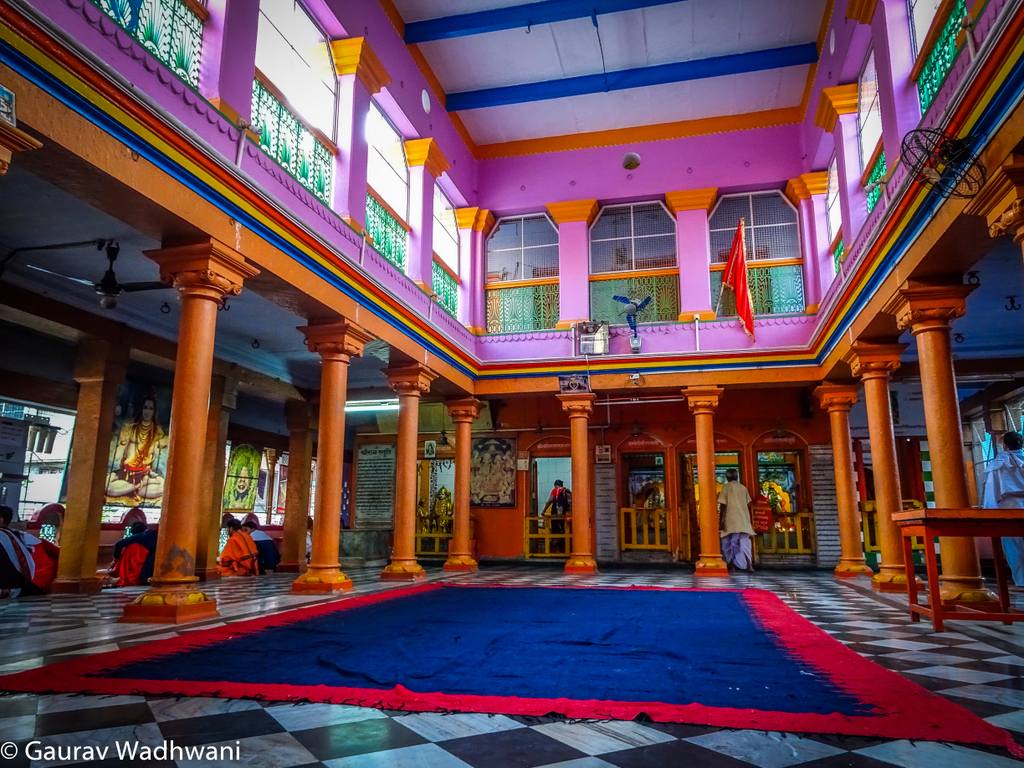 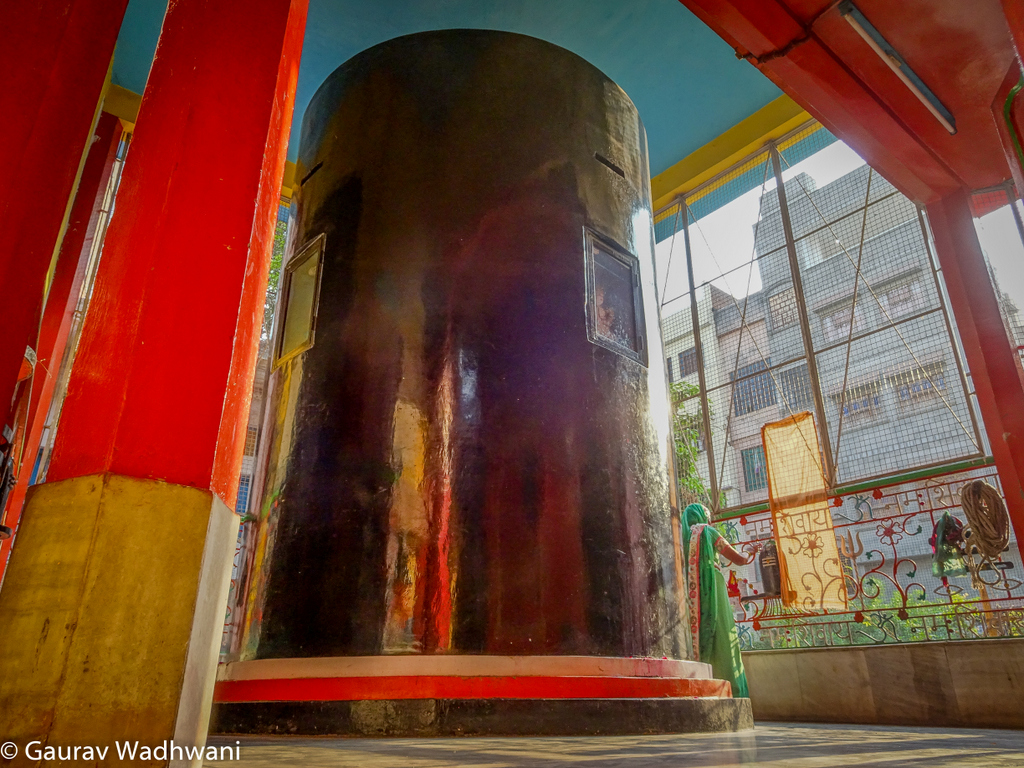 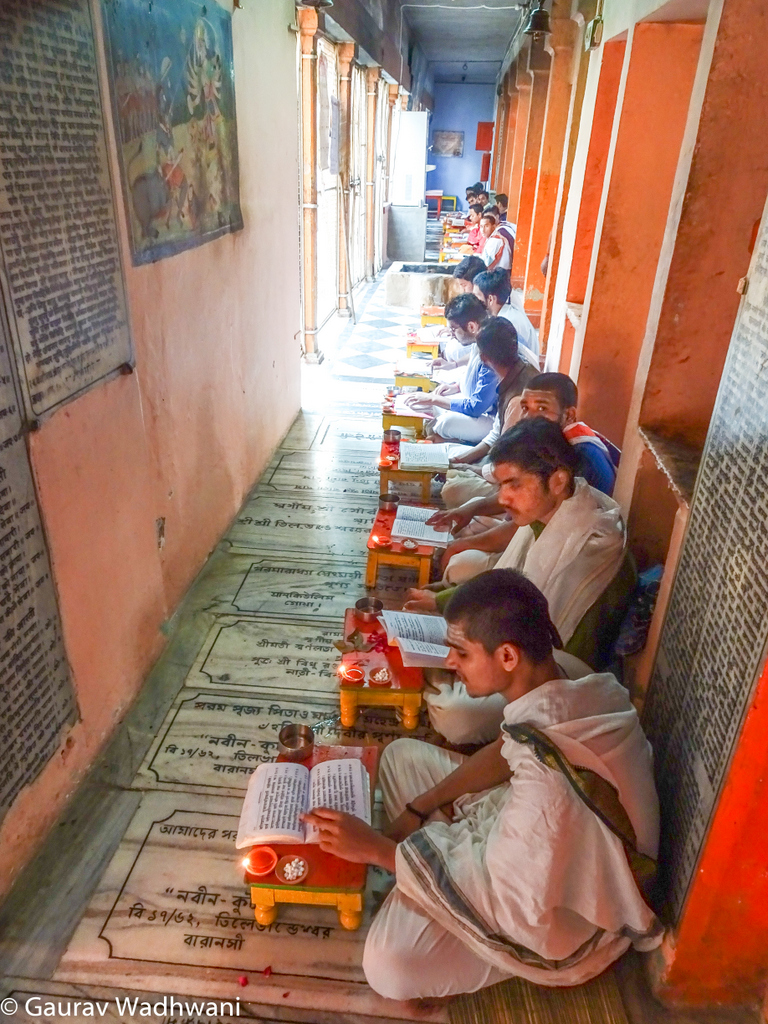 This a must visit list too. Also not to forget the Tilbhandeshwar Mahadev where the main Shivlinga increases its height by a “til” every year. There is yet another Shivalinga which is the size of a building but then It’s not the size of the idol but the size of your faith that counts because the faith fades away the all the differences.
Notice carefully, the lady is offering belpatra to smaller Shivlinga.

There’s so much to explore in Varanasi and the list could get endless. Many Buddhists come here to visit Sarnath where Buddha had given his first sermon. There are several Jain temples and you have seen the Jain ghat in the photos above. Some foreigners also come here for drugs (Zostel experience 😛 ); this is why I mentioned everyone gets what they are looking for – be it enlightenment or temporary euphoria.

There are still many places and experiences which one can do here like tasting the banarasi paan, buying most sought banarasi saris, spending time with saadhus to know their life style and the list is endless. And to know all these places you need a local resident. Thankfully in my case, I had a great company of two known doctors of the city – Manish and Aniket Pandey and their family which again is full of doctors like everyone of them! And they made me eat this specialty of Kashi Chaat Bandhar  – Tamaatar chaat and now looking at this picture it still tempts me. I will be grateful to them for showing me around.

As the last day approached, I decided to take a the boat ride to inhale the beauty of ghats, to walk by the narrow staircases, to see the burning pyres, to observe the faith of yogi’s, to enjoy the splendour of the sunrise, to seek the solace and gain inspiration for one last time, this time…………

If you haven’t read previous parts, please use these links kedarnath-part-1, kedarnath-trip-part-2. Getting to the Accommodation I followed Maama who walked swiftly through the narrow lanes near the temple premises; probably he had explored quite a lot in such a short frame of time, I thought to myself. As we reached the other end, he […]

This post is a continuation from the previous part 1 of the trip. Some point(7 km from Kedarnath) Only 15 mins after we started again that we had to stop and take shade under a roof along with many others, trying to protect ourselves from the heavy rain. What a blessing it is to witness […]

Jun 13, 2019 Exactly 6 years and two days ago, more than 5000 people lost their lives and about 1 million were left stranded. Kedarnath was devasted! Heavy floods and massive landslides had shook the state of Uttarakhand. Families were torn apart, several went missing, never to be found again. The incident must have bruised […]